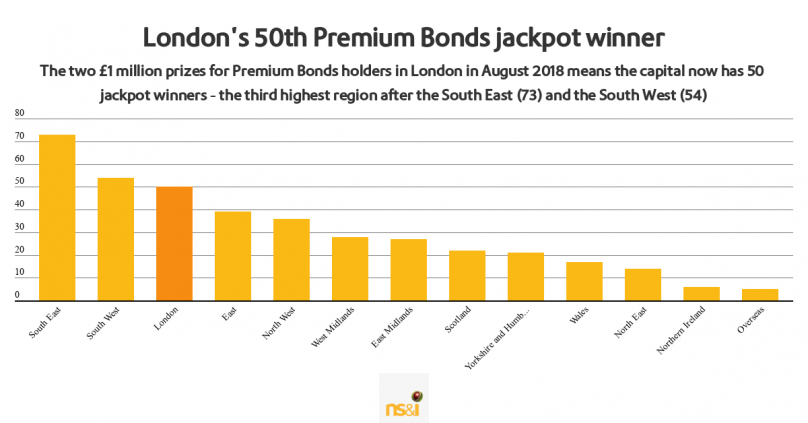 The 49th and 50th Premium Bonds jackpot winners from London were announced in August 2018 – the first time that the capital had been home to both top prizes in a single month.

There were a number of other statistics that caught our eye, so here’s an overview of some interesting numbers from the last 24 years of jackpot joy for the capital.

More money still to be paid to Londoners

London is well-known for its high proportion of people who move regularly, so it’s unsurprising that holders registered as living in the capital also collectively have a huge number of unclaimed Premium Bonds prizes.

Over 170,000 prizes worth just under £7 million are still owed to people registered in Outer London, with one prize of £100,000 from February 2007 due to a woman who has just £25 invested in Premium Bonds. Four £10,000 prizes are yet to be collected by their rightful owners, while there are a further seven £5,000 prizes waiting for their winners to claim them.

The two winners from August already opt for paperless prizes; having registered their bank details, the first winner also has her prizes reinvested into Premium Bonds, while the second has his paid direct to his bank account.

The simple process only takes a few minutes via the NS&I website, and will prevent any future prizes from going unclaimed.

While the jackpot winners get the special treatment each month, the NS&I prize checker page on the website and the free-to-download app can provide your winning news as soon as the full prizes are revealed.

There were 198 other prizes for Bond holders in the capital worth £1,000 or more, including:

Capital gains: A look back at Agent Million’s trips to the big city
Edit

Double delight for London as two Premium Bond millionaires are made

1 August 2018
Two Premium Bond holders in Outer London have struck gold this August and will be receiving the £1 million Premium Bonds jackpot.
Double delight for London as two Premium Bond millionaires are made

26 July 2018
On 1 July 2018, Agent Million made their first trip to Wales in two years – and specifically the first to South West Wales in nearly three. Here are some lesser-known facts about Premium Bonds wins in the area.​​​​​​​
Information ‘leek’: Wales-based winners of the Premium Bonds jackpot
From BBC