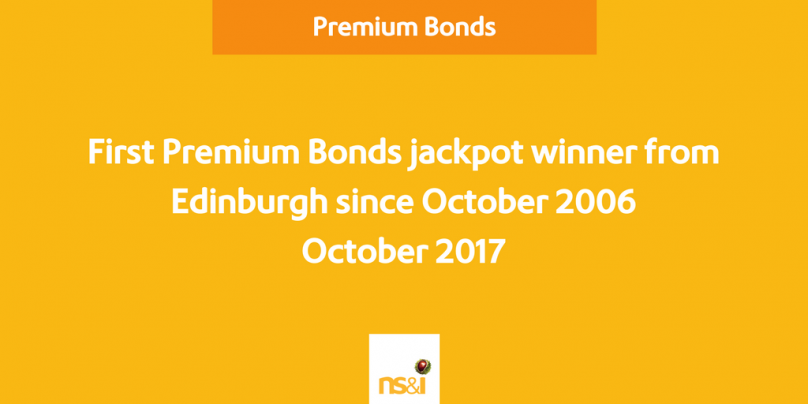 The 371st and 372nd Premium Bonds jackpot winners have been announced, with Agent Million making trips to Edinburgh and Essex this month.

It’s the first time either area has had a visit from Agent Million this year; the last winner from Essex was from December 2016, while it’s over a decade – October 2006 – since there was a jackpot prize in the Scottish capital.

“From Essex to Edinburgh, Agent Million is once again travelling the country to share the excitement of winning a life-changing Premium Bonds prize.”

“The two winners this month won’t be the only newly-crowned millionaires before the end of 2017. There are four more £1 million prizes to be won, two in November and two in December, and just under five million other prizes too.

“If someone was to invest in Premium Bonds before the end of October, their Bonds would be eligible for December’s draw, so they could become a millionaire over the festive period.”

Could Christmas come early to you?

In addition to the prizes paid out every month, there are still more than 1.4 million that have yet to be claimed, dating back to November 1957. The amount of money in unclaimed Premium Bonds prizes now totals just under £57 million, with five prizes of £100,000 among those that have yet to be paid to their rightful owner.

To check whether they have any unclaimed Premium Bonds prizes, customers can visit the NS&I website at www.nsandi.com, download the Prize Checker app for free at the App Store on or Google Play or call NS&I’s Freephone number on 08085 007007 to see if they’re owed a prize.

Register online and get your prizes on time

By registering to receive prizes by BACS, Premium Bonds winners can have their future prizes paid direct to a nominated bank account, and update their personal details and information to minimise the risk of any future prizes going unclaimed.

Over 1.5 million Premium Bonds customers have now registered for this option, including 57,561 account holders in Essex and just over 8,500 in Edinburgh. To find out more, visit the NS&I website: https://www.nsandi.com/can-my-prizes-be-paid-straight-my-bank-account

Since the first draw in June 1957, ERNIE – the Electronic Random Number Indicator Equipment that generates the winning numbers each month – has created 380 million winning numbers, paying out more than £17.7 billion.

28 December 2017
We look back on another year for the nation’s favourite savings product and look forward to another 12 months of excitement for our 21 million customers. Here are our top 10 Premium Bond stories from this year.
Premium Bonds in review: 10 memorable numbers from 2017