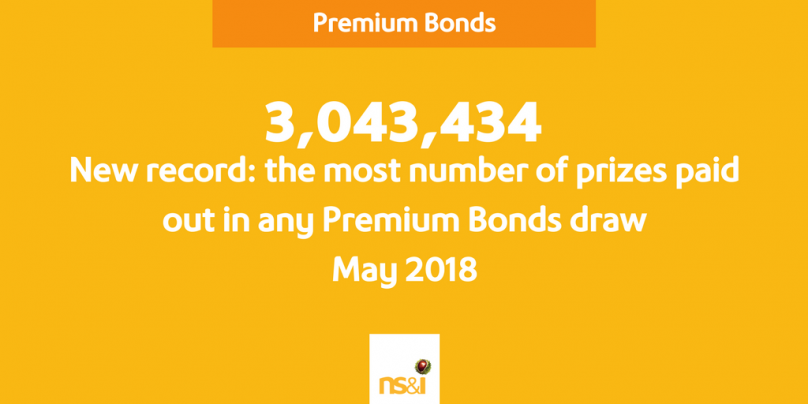 Two women from Wiltshire and Barnet have had a May Day to remember as they have scooped the £1 million jackpot prizes in May’s Premium Bonds draw.

Wiltshire is becoming a regular visiting spot for Agent Million, who will be travelling to the county for the third time in 2018, to deliver more good news. Agent Million has now visited Wiltshire eight times since the jackpot prize was introduced in 1994, meaning that over a third (38%) of Wiltshire’s total Premium Bonds jackpot winners have come in 2018.

The winner from Wiltshire is a woman who has £50,000 invested in Premium Bonds. She originally had £1,100 before investing to the maximum holding just two years ago in March 2016. The winning Bond number is 269AV661906.

Barnet sees its first jackpot winner in around eight years, with the last prize being won in August 2010. This is the fourth winner overall in the London borough. The winner from Barnet, also female, currently has £20,000 invested in Premium Bonds. Originally holding £1,000, she invested a lump sum of £19,000 into Premium Bonds in February 2011. The winning Bond number is 177KW885582.

The pair are the 385th and 386th lucky recipients of the top Premium Bonds prize.

“Both winners this month had around £1,000 in Premium Bonds before investing the lump sums that have won them each £1 million, however Barnet’s winner did not need to invest to the full £50,000 to hit the jackpot.

“While investing to the maximum increases your chances of winning, Barnet’s winner shows that you don’t need the maximum invested in Premium Bonds in order to strike lucky."

Since the maximum investment limit was increased to £50,000 in August 2015, only ten of a possible 68 jackpot winners have had the full £50,000 invested in Premium Bonds. The average amount invested for winning the £1 million prize since August 2015 is just over £28,000.

While Agent Million is busy delivering the jackpot prizes, ERNIE has also drawn over three million other prizes this May, making it a great start to the summer months for many more Premium Bond holders.

Use the prize checker on nsandi.com

Unclaimed prizes – are you due a Premium Bonds windfall?

Premium Bonds prizes may go unclaimed as a result of NS&I not being informed of changes to your personal circumstances, such as a change in contact details or if Premium Bonds were bought for you as a child and you have subsequently lost track of them. It is important therefore, to keep NS&I up to date if anything changes. In total, there are 1.4 million prizes that remain unclaimed worth more than £58.6 million.

Unclaimed prizes in Barnet date back to April 1962. There is a £10,000 prize waiting to be claimed, won in August 2012. The lucky winner of this windfall has just £200 invested in Premium Bonds.

Since the first draw in June 1957, ERNIE has drawn more than 400 million winning prizes, to the value of around £18.3 billion.

Third Premium Bonds jackpot win for Wiltshire in 2018, while Barnet strikes it lucky for the first time in eight years
Edit

2 January 2018
A man in Kent and a woman in Wiltshire have a million reasons to celebrate the start of 2018 as they have become the first Premium Bond jackpot winners of the New Year.
Agent Million brings New Year joy to Kent and Wiltshire