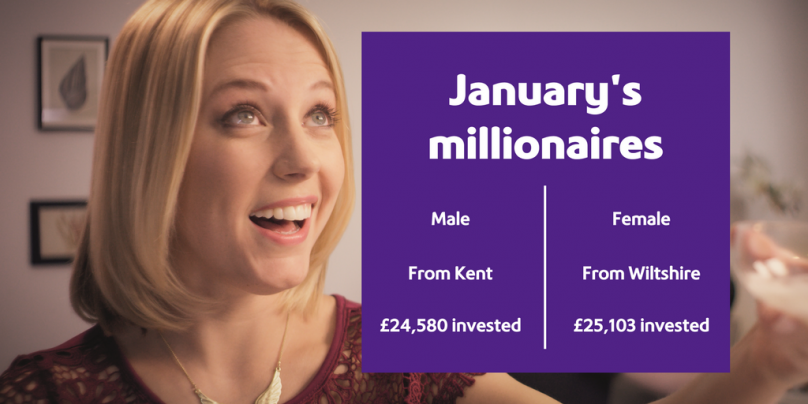 A man in Kent and a woman in Wiltshire have a million reasons to celebrate the start of 2018 as they have become the first Premium Bond jackpot winners of the New Year.

The pair are the 377th and 378th lucky recipients of Premium Bonds’ top prize.

The man from Kent bought his winning Bond (number: 112TQ018654) in July 2006 and currently has £24,580 invested in Premium Bonds. He becomes the 17th Premium Bonds millionaire from the county, and this success marks the second consecutive month that Kent has landed one of the two top prizes. Kent is now the third most successful region for winning the Premium Bonds jackpot prize.

The Wiltshire winner has £25,103 invested in Premium Bonds, and her winning Bond (number: 001TA132848) was purchased in February 2002. It’s been three years since the last Premium Bonds jackpot winner in the region and the sixth overall.

“It is great that two people in Kent and Wiltshire have been able to celebrate the New Year more than usual, with an unexpected surprise on New Year’s Day.

“We hope that many other winners will be equally delighted with their success this month, as we have paid out over 2.9 million prizes this month, the most in any single Premium Bond monthly draw to date.

“Our very own Agent Million hand delivers the good news in person, and while going to Kent will be a familiar journey, having last visited there last month, the visit to Wiltshire will be the first since April 2015."

In this month’s draw, over 2.9 million other tax-free prizes have been paid out. Customers can find out if they have been successful by downloading the prize checker app for free from the App Store or Google Play or using the prize checker on nsandi.com. The results will be published in full on Wednesday 3 January.

Bringing in the New Year with ERNIE

ERNIE – the Electronic Random Number Indicator Equipment that generates the winning numbers each month – produced over 28 million Premium Bonds prizes last year, and with the Premium Bond prize fund rate increasing to 1.40%, ERNIE will continue to spread joy to many millions more in 2018.

However, there are many Premium Bond holders who may have forgotten or be unaware that they have Premium Bonds, and may have previously won a prize that they don’t know about. In total, there are over 1.4 million unclaimed prizes worth more than £57.5 million.

The highest unclaimed prize in Wiltshire is worth £5,000, having been won in the October 2014 draw. The prize belongs to a woman with £1,505 invested in Premium Bonds and the Bond number is 185HX014948. Three other lucky Wiltshire residents who have a holding of £5 or less, each have an unclaimed prize of £1,000, while there are five residents in Kent who have scooped this value of prize with a holding of £10 or less.

“At a time of giving and sharing, many people are receiving the gift of saving to help build for life events. Many people might have received Premium Bonds when they were children or at other times for Christmas, birthday or anniversary gifts and may have simply forgotten about them as the years have passed. We are trying to make people aware that from time to time things do go missing and that it might be a good time to check whether you have won any Premium Bond prizes that you didn’t previously know about. For example, Wiltshire has unclaimed prizes dating back to 1961, while Kent’s go back even further to 1959.

“Premium Bonds prizes often become unclaimed as a result of people moving house and not telling NS&I, or not keeping their details held with us up to date. We are urging Premium Bond holders to reduce the chance of their prizes becoming unclaimed in the future by registering on nsandi.com to have any prizes paid directly into their bank account (with notification by email). There is also no time limit for claiming Premium Bond prizes.”

To check whether they have any unclaimed Premium Bonds prizes, customers can visit the NS&I website at www.nsandi.com, download the prize Checker app for free at the App Store on or Google Play or call NS&I’s Freephone number on 08085 007007 to see if they’re owed a prize.

By registering to receive prizes by BACS, Premium Bonds winners can have their future prizes paid direct to a nominated bank account, and update their personal details and information to minimise the risk of any future prizes going unclaimed.

Over 1.5 million Premium Bonds customers have now registered for this option, with over 600,000 signing up in 2017. To find out more, visit the NS&I website: https://www.nsandi.com/can-my-prizes-be-paid-straight-my-bank-account

Since the first draw in June 1957, ERNIE has drawn 389 million winning prizes, paying out more than £17.9 billion.

Third Premium Bonds jackpot win for Wiltshire in 2018, while Barnet strikes it lucky for the first time in eight years

1 May 2018
Two women from Wiltshire and Barnet have had a May Day to remember as they have scooped the £1 million jackpot prizes in May’s Premium Bonds draw.
Third Premium Bonds jackpot win for Wiltshire in 2018, while Barnet strikes it lucky for the first time in eight years

2 January 2018
A man in Kent and a woman in Wiltshire have a million reasons to celebrate the start of 2018 as they have become the first Premium Bond jackpot winners of the New Year.
Agent Million brings New Year joy to Kent and Wiltshire