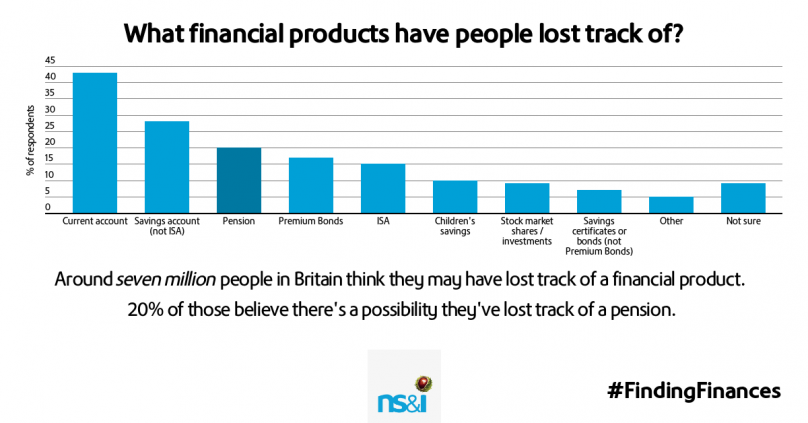 While losing money is common, with those prone to misplacing things often finding spare change in pockets (66%), bags (37%) and drawers/cupboards (34%), new research from NS&I reveals that 14% of Britons (7 million people) think they may have lost track of a financial product.

While losing money is common, with those prone to misplacing things often finding spare change in pockets (66%), bags (37%) and drawers/cupboards (34%), new research from NS&I reveals that 14% of Britons (7 million people) think they may have lost track of a financial product, highlighting the staggering amount of money left dormant with UK financial services providers. And it’s not just savings accounts, with a fifth (20%) admitting there is a possibility that they have lost track of a pension.

Paper or provider: what’s the problem?

Now that many financial products are available to manage online, the requirement to remember security details or passwords is higher than ever before. Just over half of Britons (52%) think that misplacing passwords or codes for accounts is a cause for losing track of financial products, yet 78% believe that digital technology has improved the ability to stay in touch with financial products. This figure reaches 89% of 16-24 year olds, and steadily decreases with age, however over two thirds (69%) of those aged over 65 still agree that digital technology has improved their ability to keep track of finances.

As a way to combat the complication of paperwork that may come with using multiple providers, 45% of people believe that offering a single banking platform to view all accounts would help prevent people from losing track of their financial products.

Tracing could be easier than you think

While looking for lost change is easy, only half (50%) of those who believe they have lost a financial product have ever attempted to track it down, and just over a third (34%) of these are unaware of the ways in which to do so.

NS&I offers a free tracing service for their products, and additionally works alongside UK Finance and the Building Societies Association to provide MyLostAccount.org.uk - a free service dedicated to reuniting customers with lost funds held in banks, building societies and NS&I. While the process may take up to three months to perform a successful trace, the reward could be worth the wait. To date, NS&I’s tracing service and My Lost Account combined have reunited over £770 million with customers.

“Misplacing things from time to time, including money, is common, yet searching for something you may not know exists could appear like a waste of time.

“Our research shows that 14% of us think they have lost a financial product at least once and yet only 3% have ever undertaken a trace using My Lost Account to try to find them. It can be daunting to know where to start, but if you suspect you have funds with a financial institution, you should start by contacting them directly or by using services like My Lost Account. Both NS&I’s tracing service and My Lost Account do the hard work for you, leaving you with time to spend on things that matter to you.”

Reunited with cash? Put it back in savings

It’s often easy to let your mind wander, dreaming what you would do if you were suddenly reunited with money you didn’t know you had, yet over a third (37%) of those who have potentially lost track of a financial product would move their reunited funds to a savings account. This figure increases for 16-24 year olds, with nearly half (49%) considering topping up their savings with long lost funds. This compares with just 29% of 35-44 year olds who would do the same.

Paying off debt is also a favourable option, particularly for those in Scotland where 39% of those who have lost track of a financial product have indicated they would reduce their debt over putting their recovered cash towards luxuries such as a holiday (14%) or a gift (6%).

“At NS&I our new purpose is that we want to inspire a stronger savings culture and we believe everyone should have the opportunity to save confidently. If you think you may have had savings or investments that you have lost touch with, doing a little digging and attempting to reunite yourself with lost funds may provide a chance to rekindle your savings habit.”

The Lost Items section of the NS&I Savings Survey was conducted by Populus among 4,107 British adults aged 16+ between 26th - 27th March 2018 and 29th March - 2nd April 2018. The sample has been weighted to represent the adult population of Britain.

1 in 3 Britons are unaware of how to trace a lost financial product, as NS&I reveals 7 million people admit to losing track of their finances
Edit